Who knew? Honey jar use in Voodoo. 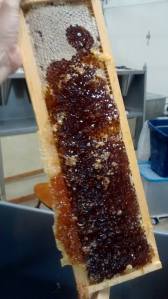 A JAR FOR SWEET WISHES
Hurston studied with Reverend Father Joe Watson, “The Frizzly Rooster.”
In describing his practice, she wrote, “There was one jar in the kitchen
filled with honey and sugar. All the ‘sweet’ works were set in this jar.
That is, the names and the thing desired were written on paper and
thrust into this jar to stay. Already four or five hundred slips of paper
had accumulated in the jar. There was another jar called the ‘break up’
jar. It held vinegar with some unsweetened coffee added. Papers were
left in this one also.”

Apparently honey jars spells have been used for hundreds of years to get someone to “stick” to you, hire you, like you, love you,marry you and get your court case settled in your favor.  Basically everything where sweetness would come into your life.  I don’t know about magic, but for sure when you give a jar of honey away, people like you better.  Enjoy these interesting webpages on the subject:

And if you need some honey, give us a shout.