The Bresse (rhymes with bless) chicken is from the Bresse region of France and holds appellation de’origin controlee status, making it hard to find outside the country.  It is a slow growing heritage breed that dates back five-hundred years and has held a high status among chef’s and foodies alike for that long.  We are lucky enough to  breed the Bresse here in America, thus changing the name to American Bresse. and are the third farm to produce them in the USA. What makes the Bresse special and undoubtedly the best tasting chicken in the world is not just the bloodline of the breed, but the strict standards by which it must be raised.  We have mimicked those poulet rouge, or “red label” French standards right here in the Northern New Jersey mountains.

The Bresse must be bred from existing white Bresse, with blue feet and brilliant red comb.  We spiral breed for quality control.  They must also have at least 32 square feet of pasture per bird and a minimum of 1 square foot per bird indoors.  The flocks are not allowed to go over 500 birds and pastures must remain fallow for one season after two flocks have been through them to give the earth some rest and recovery time.

We free range them on a mix of woodland and pasture which provides them a diet of greens and insects, they are also supplemented with a low protein grain to ensure they will do most of their eating outdoors in their natural habitat.  They are supplemented with planted clover fields, strawberry fields, alfalfa and fresh homegrown sunflowers.

After about four months, they are brought back into the chicken barn, where they are fed a diet of fresh, raw, local milk mixed with grains.  We do this for about two weeks.

They are slaughtered in a humane way, and each bird is expertly checked for any disease or abnormalities.  We then wash each bird separately and air chill them.  Air chilling ensures that the bird is brought down to 40 degrees within four hours and allows us not to soak the chickens in chlorinated water with a bunch of other chickens.  As a result our customers are paying for meat only and not a chicken that can be as much as 12% water.  We do a traditional French slaughter, leaving the head and neck on with a ruffle of feathers, and the feet remain on as well.  This practice is done so the customer knows they are getting a legitimate Bresse chicken.  We also slaughter a small percentage with the head and feet removed.

We adamantly believe in adhering to these red label standards for both the American Bresse and our Freedom Ranger chickens.  It is our passion to bring natural, fresh  food to our local community in such a way that the earth, animal and consumer all benefit from each other. 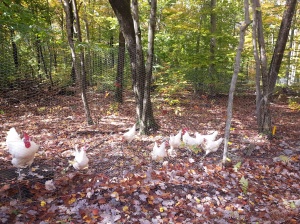 2 Responses to The Bresse Chicken